It was a game of fifth on the ladder versus sixth and after a surprise comeback from Demons and a great performance by Comets, with both sides bringing on younger players that made an impact to the game, Comets claimed the victory 48-46 and will face Western Roar next Friday night in Round 13.

From the opening whistle Comets had the advantage with first centre and found themselves on the scoreboard early. It took Demons some time to join the opposition on the scoreboard as the first few shots at goal went missed. Once Demons had settled into the game, they recognised the play and forced Comets out wide as players went boxed in mid court. The implementation of side court play saw a stunning and well-earned intercept from Demons goal defender Chanel Gomes. This left Comets with having to reset by feeding the ball to the top of the circle through to Centre, Lindal Rhode, into the hands of Comets’ shooters who found the net.

Whilst Demons were playing quickly off the transverse line, it worked in favour to GS, Meg Gallager, who worked a front hold to receive the feed and score the first of her many goals throughout the game. Gallager found her rhythm as she became more confident on the shot as the game progressed which was dangerous news for her defenders. Comets found themselves one on one with defenders standing still at the transverse line however this did not stop wing defender, Georgia Morgan, as she made several intercepts during this first quarter. Rising star shooter, Aitaua Enari, made her way onto the court and opened with a goal making an impact straight away for Comets. Moments later, the goal shooter found herself pushed to the ground however retaliated to silence her defenders as she put a dent into the scoreboard off the contact call.

The second quarter kicked off with Demons finding great transitional combination on court as an effortless feed from winger, Montana Turnbull, through to shooter, Gallager, who found the net. Comets continued to find themselves on the line; unable to separate from their defenders.

Rhode played a significant role in the first half of the game as her side used her option to reset the ball at the top which resulted in the circle opening for the shooters as GA, Sloan Burton, managed to settle the movement. Demons shooter, Bec Lil, was subbed on with less than five minutes on the clock, as Demons worked to find their shooter combination. The whistle which closed the first half of the game saw Comets in the lead by five goals.

Demons came on as a new side, as they intensified their play to commence the second half of the game. Comets read the room and went two defenders on one attacker in the circle as they tried to shut down Demons who were finding great movement combinations from their shooters in the circle and continued to find the net. Comets’ keeper, Liz Dronfield, interrupted the scoring as she implemented a sensational block to box out the attacker and win the rebound. Hughes went on to push her attacker high, as the GK noticed Gallager became comfortable setting up under the post. Winger, Bianca Grickage, stepped up to offer options to Comets on the top of the circle as Enari held a front hold on Demons keeper, Stacey Norish, for a goal. The Demons keeper didn’t like that and retaliated by intelligently reading the play to make a sharp intercept. Despite their efforts, Demons went into the final quarter in a six-goal deficit.

The final quarter of the game saw Comets come onto the court with the intention of playing possession; to maintain the margin and secure the win, however, it wasn’t that simple. Comets worked well in shooter combinations and further up the court Morgan in WD made two turnovers in mid court. Comets fought off fatigue as Demons rose up to continue the fight. At the halfway mark Demons made a substitution, replacing GA with 20U’s player, Sarah Cain. Cain came onto the court with great energy as she scored within moments of starting, her presence became known as she worked well to find Meg who was being boxed out by both Comets’ defenders in the circle. Gallager didn’t let this stop her as she scored an absolute screamer for her side.

Three minutes left on the clock saw Comets up by one goal, Enari and Burton complimented each other as they played to the other’s strengths while using Grickage on the wing before making the shot as there was no room for error if Comets wanted to walk away with the win. Demons tried to breakthrough and with only 20 seconds remaining Cain scored a howler. Time was not on Demons’ side as they needed at least another three goals for a win, but it wasn’t meant to be. 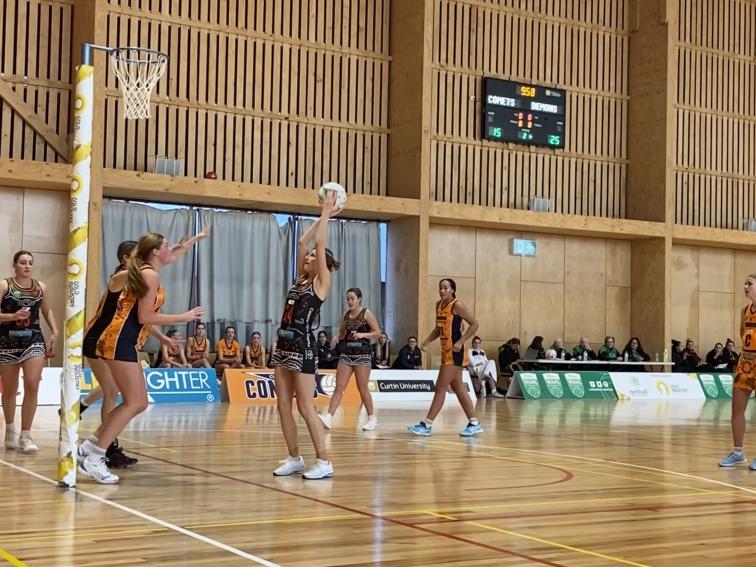